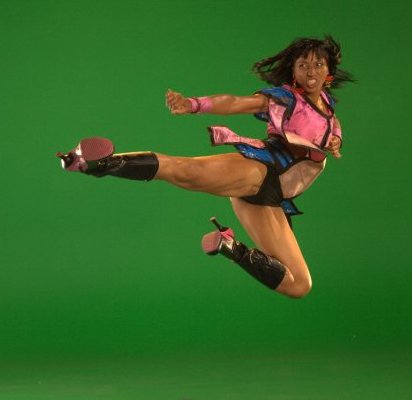 I will share a few powerful ideas that may help with these matters and you can find a wealth of additional information on my How 2B a Superhero blog and The 5 Superhero Secrets audio series available for free.

Absolutely not.  It always comes to mind how a lady started learning gymnastics when she was forty plus years old and her teacher was a sixty year old man.  This was in a gym in Hollywood where I used to go train, and let me tell you, I wish I had some of their skills!!

Another good example is Arnold Schwarzenegger, who inspired me in his movie Conan The Barbarian with his warrior strength, was actually pretty gangly as a child and yet he became an icon in bodybuilding.

Lastly, my personal case: I suffered from childhood joint issues and was also diagnosed at age 17 with  congenital spine problems and was told I would not be able to do much physically.  I went to rehab for a few months due to the strong pain and lack of mobility, but at the end I knew that there was a force beyond the physical  that no doctor can pinpoint.

There is always the power of our heart’s desires and our mental focus, both together can make ANYTHING possible!  Using this power, I healed my back and my body with the passion I had for arts and freedom of expression and thrived in a career that depended on athleticism.

Success is not based on one single quality.  We are multidimensional beings and as such, our experiences and actions are comprised of multidimensional aspects.  Even though at the moment we might be focusing on athleticism and thus bringing in a scary closeup of our lack of such, many other aspects are still a wealth of resources within ourselves that we can include in the picture for effective use.

I have met people during training that had great lack of athletic ability, and in some cases were considered as having medical disabilities.  Despite any lack of natural ability or even limitations placed on them by medical diagnoses,  I witnessed time and again, individuals achieve skills and abilities beyond those considered “naturals” using  other elements in their multidimensionality, such as discipline, passion, endurance, mental and physical toughness,  to shore up any elements that are lacking.

In this same way, there are many singers with amazing voices, but the most successful are not necessarily the most gifted ones.  Character traits that play a major role in success, beside merely good singing, can include being expressive and the ability to awaken emotions in others, being responsible so that producers trust you, being internet savvy to promote yourself so that you can reach an audience.

3) IS REPETITIVE MOVEMENT THE JOY OF BEING ATHLETIC?

And the answer is… NO!

Repetitive movements are a means to an end that many of us may not feel passionate about.  The joy of athleticism, however, is the self empowerment , health, and freedom of expression that it brings.

I must confess my challenge to feel connection with my physical aspect and the discipline to train.  What truly made me become a professional martial artist and dancer was my love for the Arts and my love for self-expression and empowerment.  I don’t exercise just for the sake of the exercise itself, but for the benefits that derive from it and even more because of other passions that I am able to tie into it.

For instance, Gymnastics may bring me the joy of experiencing my body and energy moving in new and different ways, feeling free, as if I could fly.  Martial Arts and stunts feel empowering and I feel like a Superhero, so it gets better than just watching the movies.  So the more I practice a technique or a trick, the more I get engaged to the good feeling chemicals that are released in my body when I perform it and want more of it.   I also choose movement disciplines that make the body intelligent because I can see how that intelligence will then reflect at other levels in a holistic way, expanding awareness greatly.

So MAKE A LIST OF PARALLEL BENEFITS AND PASSIONS RELATED TO WHAT YOU WANT TO TRAIN and make that your training bible!!

Well, wishing I had more time to share about this theme, but for now, wishing this helps.  I love you and I love connecting with you.

Go to the full blog>>