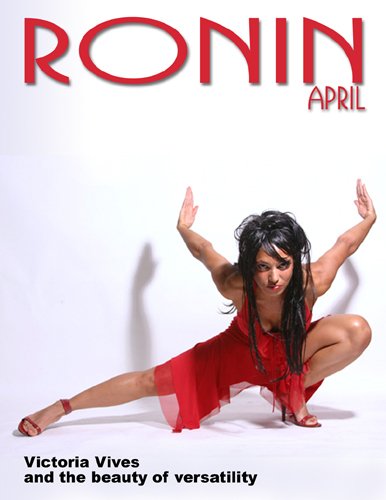 My interview in www.roninmagazine.webs.com. Special thanks to Juan Laborde.

How many skills are too many?

Is it better to master one skill or be a Jack-of-all-trades?

It’s not about studying few or many skills, but rather about mastering and knowing one’s self.

Before I explain, let me share with you a bit about myself.

I am originally from Spain, and live in LA now. I’ve studied many Martial Arts over the years ranging from classical styles like Wing Chun, Kendo and Kiryu Kenpo, combat sports like MMA, Boxing and Kickboxing, stage fighting and gymnastics, to reality based self defense arts like Jeet Kune Do and Brazilian Jiu-Jitsu.

Going back in time, there were two aspects that really attracted me to martial arts. One was the movies. Fight scenes demonstrating such a great skill, such an excitement! It was artistry and passion turned into flowing yet powerful movements.

The other aspect was the inner development, the mastery of energy. Somehow, I felt that this was an intrinsic aspect that would stay with me forever.

So, if you put it together, my drive was about self-discovery and self-expression.

I have not been a martial artist all my life, in fact, I started martial arts about seven years ago. Before that, you could say that I was pure warrior energy in need to be tamed. In other words I was a warrior at heart but without any training.

The ways in which I would experience self discovery and self expression before entering the martial art world varied from singing to acting to drawing and painting, to writing poetry. Oftentimes people would tell me that I was spreading myself too thin as I continued to learn new skills. What I noticed however, was that I could use what I was learning in martial arts to improve my dance technique. I could use aspects of breathing from singing to improve my martial arts. I began to feel and understand that all my skills, thoughts, feelings, and experiences formed an intricately interconnected web expanding in all directions, like the universe, rather than following a singular path.

Even now I continue to expand by exploring new ways of expressing myself. For example, teaching martial arts, founding a production company, starting the How 2B a Superhero movement to empower others, and studying the Healing Arts.

Whether you choose one skill to develop for life or you decide to explore many, the driving force behind your choice is what really matters. The “why” is always more important than the “what”.

So next time that you are about of deciding which path to take in your life, or when somebody suggests
to you that it has to be “either or”, remember that it can indeed be “and”. Choose wisely and know “why” you choose.